Last week saw the release of a flood of economic data. In an unexpected surprise, U.S. GDP contracted in the fourth quarter by 0.1%.  Fortunately, economists believe that the number is artificially low because of some unusual factors, including lower defense spending. Increases in consumer spending, construction, and business investment showed that the economy is still on a moderate growth path, and absent certain oddities, would have grown at a very respectable 2.5%.[iv]

January’s final consumer sentiment number beat expectations, as consumers regained confidence lost during December’s fiscal cliff debate; though people are still worried about the new tax increases and gas price hikes.[v]  The latest employment numbers show that the unemployment rate ticked up to 7.9%, however, some of the increase is seasonal in nature. Even better, economists are revising their 2012 employment numbers as more jobs were created than they originally thought.[vi]

As earnings season wraps up, we can say that the trend has been just “good enough;” not great, but not awful either. Total earnings for S&P 500 companies that have already reported are up nearly 2% over the third quarter, meaning that companies are doing better than last year. Generally speaking, executives are upbeat about future earnings and business conditions, meaning we could see even better performance in the first quarter.[vii]

After last week’s flood of economic reports, this week will be slow in terms of data; however, analysts will be looking at Thursday’s jobs report and productivity to determine whether the economy is still on a positive trend. While we’re happy that the market is experiencing a rally out of the gate, now that we’re pushing close to historic highs, let’s talk about what could cause markets to pull back. With next week so light on data, it’s possible that traders will turn their attention to the so-called “sequester cliff,” the mandatory federal spending cuts due to hit March 1, and the ongoing debt ceiling deliberations in Washington. While many economists don’t see the sequester as a huge problem, it will adversely affect certain sectors (such as defense) and possibly cause market jitters.

As stocks move towards a sixth week of gains, it’s good to keep in mind that the markets are cyclical in nature, and that ups and downs are both elements of healthy markets.[viii] Whether the bull keeps running or loses some steam, our focus will remain on helping our clients make appropriate investment decisions in harmony with their personal financial goals - something we do in every market environment. 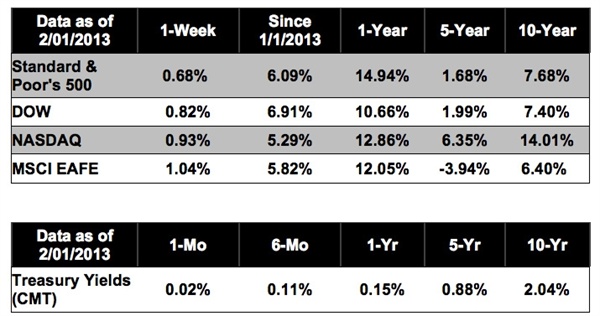 Notes: All index returns exclude reinvested dividends, and the 5-year and 10-year returns are annualized. Sources: Google Finance, Yahoo! Finance, MSCI Barra. Past performance is no guarantee of future results.Indices are unmanaged and cannot be invested into directly. N/A means not available.
The Standard & Poor's 500 (S&P 500) is an unmanaged group of securities considered to be representative of the stock market in general.
The Dow Jones Industrial Average is a price-weighted average of 30 significant stocks traded on the New York Stock Exchange and the NASDAQ.
The Nasdaq is a computerized system that facilitates trading and provides price quotations on some 5,000 of the more actively traded over-the-counter stocks